Giving a shot in the arm to the Aam Aadmi Party (AAP) and a huge blow to the Punjab Pradesh Congress Committee (PCC), five Congress councillors, including the Mayor of the Municipal Corporation, Hoshiarpur, joined the ruling party today.

I have joined AAP for development of the city and welfare of the people. Since there’s AAP government in the state, we (all five councillors) felt that we may serve the people better through AAP, so we took the decision. Surinder Kumar, Hoshiarpur Mayor 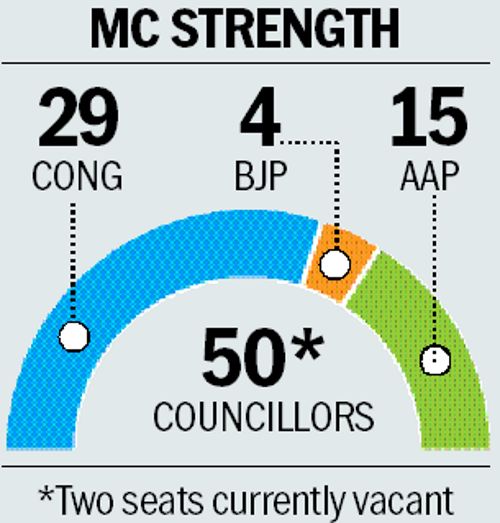 Now speculation is rife who will hold the throne of the Municipal Corporation, even though the Congress still holds the majority with 29 councillors in the 48-member House. There are 50 wards under the Municipal Corporation, of which two wards (Nos.6 and 27) are vacant. Brahm Shankar Jimpa had resigned as councillor from Ward No.6 on becoming a Member of the Legislative Assembly in the recently held state elections. One more seat is also lying vacant due to the death of the councillor from Ward No.27. At least 26 councillors are needed to call the shots for the mayor’s post, and the figures are not currently in favour of AAP.

There is also a discussion here that a councillor, who had left the Congress a few days ago and joined AAP, was earlier aspiring to be the mayor, but the Congress elected Surinder on the ground of seniority.

But now, that councillor is again in the fray and trying to woo some councillors. Earlier, some Congress councillors, who were angry with the Mayor over some issues, had started a campaign against him, after which a former minister had also intervened and asked the Mayor to get his act together. Asked about why he decided to join the ruling party, Mayor Surinder Kumar said he had joined AAP for development of the city and welfare of the people. “Since there’s AAP government in the state, we felt that we may serve the people and develop the city better through AAP, so we took this decision,” said Surinder.